1. Man perceived the magnitude and glory of the corporeal worlds. He said, How shall I
speak of Thy great works, O Jehovih, and of Thy wisdom and power! Shall I open my
mouth before Thee! I look upon Thy countless stars, suns and moons, spread out over the
heavens! The millions of years Thou hast rolled them on in the never-ending firmament!
Processions in and out, and round about, of mighty worlds! By Thy breath going forth!

2. O Thou, All Highest! How shall I hide my insignificance! I cannot create the smallest
thing alive! Nay, nor change the color of a hair on my head. What am I, that Thou has
seen me?

3. Tell me, O my Creator, whence came life? This unseen within me that is conscious of
being? Tell me how all the living came into life.

4. Jehovih heard the words of man and He answered him saying: Let a sign be given to
man that he may comprehend se’mu. Thereupon Jehovih caused the jelly fish and the
green scum of water to be permanently coming forth in all ages, that man might
understand the age of se’mu, when the earth and the shores by the water, and the waters
also, were covered over with commingled atmosphere and corporeal substance. And this
substance was called se’mu, because by Jehovih’s presence quickened He it into life, and
thus made He all the living, both the vegetable and animal worlds. Not that se’mu is jellyfish or the green scum of water; for the earth in this day produceth not se’mu abundantly; nevertheless the jelly-fish and the green scum of water are signs of that which was in that
day of the earth.

5. Jehovih said: Because of My presence quickened I into life all that live, or ever have
lived.

6. Because I am male and female, even in my likeness, thus made I them. Because I am
the power to quicken into life, so, in likeness of Me thus, made I them, and with power to
bring forth.

7. According to their respective places created I the living; not in pairs only, but in
hundreds of pairs and thousands, and in millions.

8. According to their respective places and the light upon se’mu, so quickened I them in
their color, adapted to their dwelling places.

10. Let a sign be upon the earth, that man in his darkness may not believe that one animal
changeth and becometh another.

11. Thereupon Jehovih gave permission for different animals to bring forth a new living
animal, which should be unlike either its mother or father, but he caused the new product
to be barren.

12. Jehovih said: And this shall be testimony before all men that I created each and all the
living, after their own kind only.

13. Such is My person and My spirit, being from everlasting to everlasting; and when I
bring a new world into the time of se’mu, lo and behold my presence quickeneth
the substance into life; according to the locality and the surroundings, so do I bring
forth the different species; for they are flesh of My flesh and spirit of My spirit.
To themselves give I themselves; nevertheless, they are all members of My Person.

14. As a testimony to man, behold the earth was once a globe of liquid fire! Nor was there
any seed thereon. But in due season I rained down se’mu on the earth; and by virtue of my
presence quickened I into life all the living. Without seed created I the life that is in them. 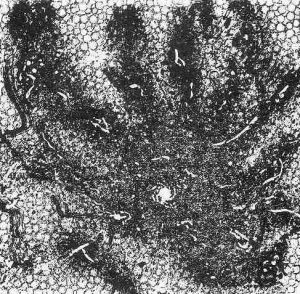 Jehovih said : Behold, I caused all the living creatures to gestate in
darkness. And this shall be testimony to the end of the world, that, when I
created life on the face of the earth, she traveled in My se’muan firmament.