1. The Voice of the Creator was with Ah’oan from the time of his landing in these lower
heavens. And Ah’oan chose from his hosts a Council of ten thousand, and they sat in a
living altar; and the Voice directed him to build a capital and a throne, and call the
plateau thereof Sang’hi; the which he did.

2. And when it was completed, Jehovih said to Ah’oan: Thou art My Lord and My God;
the labor of thy hand shall endure on the earth and in heaven. Whatsoever thou buildest, I
will build, for thou art of My holy place. Make thyself an otevan, and go around about in
thy dominions, and inspect all things, making a record of the same, which shall be
deposited in the libraries of these heavens, that angels and mortals, in after ages, may read
them.

3. Ah’oan made an otevan, and traveled as commanded, making a record, and preparing
also a place of records, in Sang’hi, where these things were deposited; of which these
words are a brief transcript. That is:

4. Heaven was without order or organization, save one kingdom, ruled over by Oibe, who
falsely styled himself Thor, the only begotten Son of Jehovih.

5. The spirits of these heavens are mostly of the first resurrection; nevertheless, there are
millions of them who believe they are not dead; and for the greater part, these are in
chaos, still lingering on battle-fields or in the places where they were cut off from the
earth.

6. In many places there are spirits who set up colonies, trying to provide themselves with
homes and clothing, and to found heavenly abodes; but they are forever overrun and
pillaged by drujas.

7. With and around about the people of Jaffeth there are more than two thousand million
angels who know not how to get away from the earth. Of these, millions of them are
fetals, making themselves as twin spirits to mortals. These spirits oft show themselves to
mortals, but are believed to be doubles; but the spirits thus bound know not themselves
who they are, or whence they came; neither can they go away from the mortals to whom
they are bound, and on whom they live.

8. As for the mortals of Jaffeth, they have cities of warriors, huge and fierce. The earth of
this region hath been in a’ji thirteen hundred years.

9. After Ah’oan had thus discovered the condition of things, he returned to Sang’hi, and
they sat in Council, and Jehovih said to Ah’oan: Forty Lords shalt thou appoint to dwell
on the earth; and to each Lord thou shalt give ten thousand assistants. And these Lords
shall go down to the earth, and drive away the drujas, and take possession of the kings’
and queens’palaces, and of the temples of the stars; and they shall obtain control over the
captains and generals of armies, and blind their judgment, and lead them astray, so that
they will be powerless in war and destruction.

10. And when Samati, God of Zarathustra, traveleth in Jaffeth, thy Lords shall go with
him, with a sufficient number of angels to accomplish successfully all that Zarathustra
professeth in My name. And thy Lords shall shield Zarathustra around about, that no
harm come to him; and when enemies pursue him, thy Lords shall lead them astray or
detain them till such time as will enable Zarathustra to escape. For in this dawn shall My
word be established on the earth, to perish not forever.

11. And when thou hast thus established thy Lords, thou shalt colonize thy heavens,
giving them seventy colonies; but Sang’hi shall be the central kingdom. Thou shalt choose
from amongst the atmosphereans one who shall be thy assistant God, who shall sit on thy
throne during thy absence.

12. And thou, and thy Holy Council, shall instruct thy assistant God in such manner that,
when this dawn is ended, he shall become God, in My name, of Sang’hi, for the next
succeeding two hundred years.

13. Ah’oan informed the Council of the words of Jehovih. And Ah’oan appointed the forty
Lords, as commanded; also appointing an assistant.

20. So Ah’oan sent his Lords to their several places, with their assistants. And after that
he began the colonization of the angels in his heavens. And in one year he had
raised up from Jaffeth more than a thousand million, and prepared them with houses,
hospitals, nurseries and factories, and all such things and places as are required in hada.

21. In the second year he delivered another thousand million, more than half of whom had
to be taken away from the earth by force. And these he also housed and provided with
teachers and overseers in like manner.

22. So by the time Samati, God of Zarathustra, was prepared to travel in Jaffeth, visiting
the kings and queens, the Lords of Ah’oan had so far banished the drujas that they were
powerless to prevent the decrees of the Father’s word. And when Zarathustra went into
Jaffeth, behold, the Lords of heaven were with him, and God of the Word was with him,
and the kings and queens of earth were powerless before him.

24. Thus did Ah’oan’s dominions extend down to mortals; thus became the word of
Zarathustra Jehovih’s Word to mortals.

25. And now Fragapatti, Chief over all, was coming to inspect the labors of his Lord God,
Ah’oan, and of Samati. Ah’oan had sent commands to his Lords, and to their assistants, to
return to Sang’hi and remain three days in recreation. And Ah’oan commanded the
captains of the colonies of heaven to come, and to bring with them as many of their pupils
and subjects as possible.

26. And it came to pass that when Fragapatti’s avalanza came to Sang’hi, there were
assembled upward of two thousand million souls to witness the pageantry and
proceedings. Ah’oan had provided the means and facilities that these things should be
magnificently carried out.

1. Never in these heavens had there been such pageantry and display as when Fragapatti’s
avalanza entered Sang’hi; never so many musicians, two millions, distributed to lend so
great an effect to a procession.

2. Of this matter, Ah’oan said: By the pageantry and the music were my hosts of
delivered drujas made to realize the glory of the upper heavens; by the glory of those
three days’recreation did I shut out the attractions of the lower world. My people
were entranced with delight; they were born for the first time into the kingdom of heaven!

3. Ah’oan said: But the greatest glory of all was when Fragapatti honored the throne of
Sang’hi. Jehovih cast a sun upon the place; and the Voice spake from the Light, so that all
the multitude saw the Light and heard the words of the Father! And when Fragapatti rose
up and stood in the midst of the throne, the Light was so great that millions of the people
fell down because of its glory.

4. The lights were lowered to suit the newly born in heaven, and the people of etherea
mingled with the atmosphereans, diverting, explaining and inspiring them with the
magnitude and glory of the higher heavens.

5. After the recreation, and when the multitude were in order, Fragapatti spake from
Jehovih’s throne, first, to Es’pacia, Daughter of Jehovih, assistant Goddess to Ah’oan, who
was to succeed him after dawn. To her he said: Es’pacia, Daughter of Jehovih, hear thou
my words; I am one with the Father, and in His name salute thee. Behold, from this time
forth the Father’s Word shall dwell with mortals.

6. It shall become anchored to the earth, never to depart; though it may be mutilated and
perverted, yet His hand is over it, and it shall not fail. As a mother delighteth in the first
spoken words of her child, so shall we all take delight that the Father’s word hath become
engrafted on the earth. Before this time, the Word was with the I’hin tribe, but locked up
in secret. It could not be maintained on the earth, but by locking it up in secret, with a
people prepared as seed for delivering all the races of men. But now the Word is
delivered openly to mortals.

7. If the spirits of the lower heavens know not the Father’s Word, they can be hereafter
taken down to the earth and there taught His commandments. Prior to this time, the
angels of these lower heavens had no Word at anchorage; they constantly fell in darkness,
and pulled mortals down with them. Behold, the Word is now engraved, through our
Sons, Samati and Zarathustra; it cannot be lost.

8. Thou hast been exalted first Goddess of these heavens, and Lordess of this division
of the earth, to maintain the light of this dawn, to angels and mortals. Thou shalt first
of all labor to protect the Word to mortals; to all the priests and cities of Zarathustra
thou shalt appoint the wisest of thy angel hosts, to protect them and to maintain the Word.

9. But to such mortals as deny the Word, and to such as seek to destroy the Word, thou
shalt lend no assistance, but leave them either without angels, or with only such as will
lead them into failure. Maintain thou thy hosts in the temples of worship, where they
worship the Great Spirit.

10. Throughout Jaffeth thou shalt inspire mortals to hang the wheel of the altar in country
places, by the roadsides. And when mortals pass the places, they shall turn the wheel, in
remembrance of the Creator. For which reason thou shalt station at each and every one of
these altars angel sentinels, who shall have messengers to thy throne. And when a mortal
passeth the wheel and turneth it, and is afflicted with sickness, thou shalt send angels to
him to heal him. But if he turn not the wheel in remembrance of the Father, and yet be
afflicted with sickness, thy sentinel shall not send to thee, nor shalt thou send angels to
heal him. Nevertheless, the wheel and the altar shall cause men to think; and if, after a
disbeliever hath passed the wheel and not turned it, and he be afflicted with sickness, and
he repent and go back and turn the wheel, then shalt thou send to him in haste and heal
him, that he may proclaim abroad what the Creator hath done for him.

12. Fragapatti then spake to the Council, which was after the manner of his words in
Astoreth. After that he walked down to the foot of the throne, where the marshals had
provided a place for the people to pass before him, even as they had done in Astoreth.
Accordingly, when the musicians began singing and playing, the people marched before
him, and by the waving of his hands, he created drapery, and flowers, and wreaths, and
gave to all the people something, even though there passed before him two thousand
million angels! 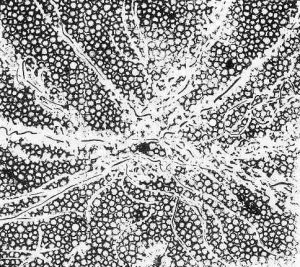 THE EARTH IN THE CROSS-ROADS OF HORUB.
Jehovih said: In Horub I delivered My first Holy Book to mortals, through
My Son, Zarathustra. After that I carried the earth in darkness, that it
might be perfected for the generations of men to come afterward. Thus
provided I the nations which I delivered through Capilya, Moses and Chine.

One thought on “Lectionary Readings for Thursday, March 19th, 2020”