RADICAL WORDS IN CHINE, AND IZ, AND ALGONQUIN. 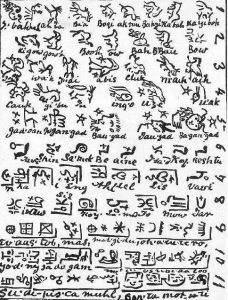 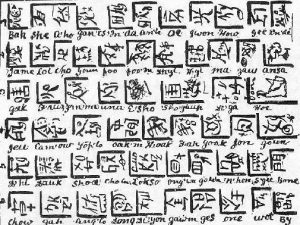 The sacred birds of Zerl were written by an outline drawing of each and every one; but
the pronunciation (in imitation of its speech) was different in the whole of the thirty-four
tribes. The tame quadrupeds had fewer names. In Iz or Ez there were but twenty-two
tribes, and, being the most sacred tribes of the west of the continent, their pronunciation
varied less. Eolin said: Because Iz hath kept my commandments holy, I have bestowed a
new tablet (Kii) 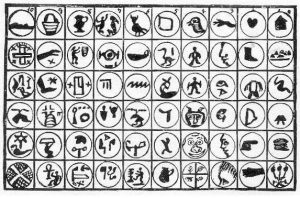 4. Off, – the birds or feathered tribes.
Le’bashed, – to be clothed.
Toff, – timbrel; also psalmist.
Mits’vah, – the enforced law, the established, the authority of judgment.
Ay’in, – conceit, the hidden enemy in one’s own heart; they were puffed up in their
conceit and would not hear.
Ar’bag’ebul, – the four quarters of the world (Kii).

5. Sef’fer, – scroll, book or tablet.
Aven’ibi, – the belief that man was once a bird. The worship of certain birds because it
was believed man sprang from them, hence Aven’ibi, the idolatry of birds; the
philosophy that led to the idolatry of animals.
Aheba, – the adorable love.
Ya’sha, – upright.
Alef, – foremost.
Man or maun, – vessel.

6. Ra’o, – the evil, the entity evil. As Ra, death, is to mortal things, so is Ra’o to spiritual.
Mira, – a lamp.
Mi’qut’so, – angular, corner.
Kar’tugh’nuin, – magician; one with familiar spirits.
Maqatteroth, – an utensil for burning incense.
Nasag, – to ascend.

7. Te’ke’ua, – supplication.
Otsar, – storehouse against famine; also place for treasures.
Ra’ka, – kingdom or king and his people, or father and his family.
Aboda, – to labor or to make brick; also brick dried in the sun (ado’da).
Zemar, – music, written notes of.
Nat’sack, – chief musician.

9. Lechen, – bread, or bread-basket, or food, or food-basket.
Asen, – evil hand, or power to cast spell.
Assogen, – evil foot, or power to walk around one’s house and so cast evil on the house
and family.
E’o’ten, – the All Provider, the sign of offering.
Edan, – prophecy.
Hoe’dan, – angel visitation, or the manner of prophecy. 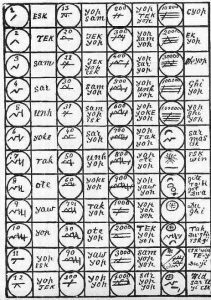 One thought on “Lectionary Readings for Thursday, July 11th, 2019”