Shlama to all the dear brethren,

While the holy books from various Spiritual Communities within the Religion of Light contain some of the words of the Third Messenger concerning the fate of certain false religions, adherents should be careful as not to condemn their fellow brothers and sisters who have been called by the Third Messenger to serve as missionaries in groups that are generally understood as being outside the Religion of Light. Some of these brethren have been instructed by the Third Messenger or the Teacher of Light to enter into these “other communities that are at the base of the mountain of truth, so as to teach those other adherents about the true Light.”

We read from the words of Mir Izgadda:

“I have sent some missionaries among the Catholics, among the Baptists, Methodists, and others to serve as a light to the lost sheep of Yisho [Jesus], and they will hear the voice of the Shepherd and they shall look up and see his face, and at that time, they shall come forward into the Light.” (Mitnaranuta d’Mir Izgadda – Chapter 67:44)

The Father of Greatness, the Living Spirit and Mir Tarendra does not permit such ones to become unclean by their association. They are often given a mission while there to slowly, or gradually influence others around them to see the Light. Such ones, whether meeting with Baptists, Catholics, followers of Cao Đài, or Bahá’ís, such missionaries will be blessed. Of course, that would not include any sect of Islam, witchcraft, or other similar dangerous religious groups and cults.

Both the Third Messenger and the Teacher of Light have spoken of certain individuals who are a members of other religions as being “faithful to God’s voice”. Mir Izgadda said, “I know some individuals in groups not known as adherents of the Religion of Light, that are more faithful to the voice of the Father of Greatness than some individuals who are within the Religion of Light. The compassion and Light of God shines upon them, and they are blessed according to their abilities to serve Him, even though they may not be thought of as adherents of the Religion of Light. Yet, they are still servants of the One True God, and as such they have a special covenant that was written upon their hearts with my own right hand.”

If you take the words of Mir Izgadda seriously, and if you believe in the truth of his teaching and those of the Divine Messengers, then you also know that it is not your place to judge or condemn those who have been called into a “special covenant” with God, even though they may not be members of Religion of Light communities that you are aware of at this time. Instead of condemning, it is best first to scrutinise your own practices and faith. Such individuals have a covenant with God, but if you are calling down judgement and condemnation upon them, you have broken your own.

May all the adherents of the Religion of Light use their God-given discernment in knowing who their brothers and sisters are and remain faithful to their covenant. 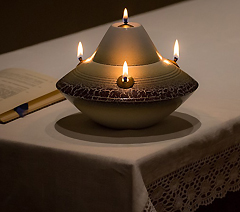