FONECE.
(The Seventh Degree In The Order Of Israel.) 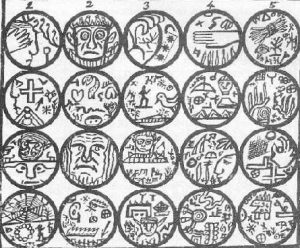 2. Pupil: A Son of Light. Behold the sign and emblem.

3. What sawest thou in the light?

5. What was the fashion thereof?

6. The altar of incense and altar-fire rose up before me. The wind ascended and the stars
shone in the firmament. A tree grew by the battlement and the black evil crossed the
south-west. In the midst stood the cross of Eolin, studded with pearls and diamonds.

7. What more sawest thou?

8. In the south-east floor of the temple, satan, black with the smoke of blood and war,
demanded my surrender. And he drew forth the flaming sword.

10. I said, I pray to none but the Ever Present Creator. In Him I have faith. Thou I fear
not.

12. I came to the chamber of industry and I was taught a useful trade. After that I traveled
north-west.

13. And was honored for thy good work and love of peace, I suppose?

14. Nay, Master. I was confronted by a crowned king. He bade me halt, and ordered me to
pray to the God he served. I remonstrated, saying: I only pray to the Great Spirit, trusting
only in good works done unto all men. Thereupon he flew into a rage, saying: Thou art
the worst of men; thy soul shall feed the fires of hell. With that he hurled a javelin at me.

15. I escaped and traveled north, and came to a country most rich and prosperous, where
many Israelites had gone before me.

16. Why didst thou not tarry there?

17. I did, for a season, but warriors came and possessed the land and drove the Israelites
away.

19. I fled to the north-east, and came amongst savages, where I barely escaped being slain
and feasted upon.

21. I traveled east and came into a country old in religion and philosophy. They had great
riches for the rich and great poverty for the poor. Their philosophers wasted their time in
reading the ancients.

22. Why didst thou not remain with them?

24. Whither next didst thou travel?

25. Toward the north part of the middle kingdom, where I came amongst magicians and
necromancers.

27. They consulted the stars, and the moon, and the palms of their hands, and called
up the spirits of the dead, who did appear before them. There was no industry amongst
them, and I could find no employment with them. Neither did they assist one another.

29. I went further south, where I came to an uninhabited country, the most favored under
the sun. It was a place of joy and praise, filled with beautiful rivers, forests, plains and
valleys, and countless singing-birds, all things raising up the ceaseless voice of glory to
Great Eolin. Here I sat down and wept.

31. Alas, I remembered the crowded cities and warring empires. Here there were no
people, and I could not live alone, so I traveled still further south.

32. And certainly found a good place next?

33. Alas, me. The country was good, the climate warm, and all things grew abundantly
without labor.

34. And why not most excellent?

35. Voluptuousness was an ocean for them to bathe in. And for all sins, their priests
taught them, that, if before they died, they called on Daeves, Son of the sun and Savior of
men, they would ascend to the upper heavens on the third day after death. Not myself
loving indolence nor lust, I departed out of that country.

37. Toward the south-east, coming into a land afflicted with priests, soldiers and beggars.So I fled further east.

39. I came to a small settlement of Israelites where I was received by warm hands. Here I
prepared to settle down in peace during all my days. But the state soon became attractive
by its places of learning and the beauty of the gardens and glory of its manufactories.
There being no idle people nor beggars amongst us, the idolaters of Hemah, Savior
of men, accused us falsely and then declared war on us, and with a powerful army
marched upon us, taking all our possessions. I escaped and turned westward once more.

40. Thy fate hath been hard. Why smilest thou?

41. Because, however hard hath been my fate, it is nothing to that which I saw had once
befallen another people where I came next.

43. This was a country once rich in ancient temples and monuments, but now ruined and
desolate. Broken pyramids and colonnades, tumbling walls, and thorns and wolves,
marked the once habitable places of mighty kings and high priests. By the tablets on the
moldering walls I read that these people in ancient times long past were worshipers of
idols and of Gods who professed to save the souls of men. And I saw that their pride and
glory lay in ships of war and mighty weapons of death. Having myself learned the trade of
a potter, I took up an ancient, ruined pot, and read this inscription on it: Because I am a
Faithist in the Great Spirit, Eolin, I am enslaved by these idolaters. Alas, what is my
crime?

44. Most pitiful place! Whence then?

45. I met a friend whose head had been compressed in infancy in order to make him a
prophet. He took me into his private habitation and taught me how the brain and nerves of
flesh could be changed in infancy by pressure to make the grown-up man of any character
desired. Next he taught me the monotony of sound that brings on the prophetic spell and
power to see the unseen. Thus did he expound the philosophy of miracles, even to dying
and coming to life again.

46. Wonderful philosophy. Wilt thou show me some of these miracles?

47. I will, O Master, but the secret of their workings I can not show.
(The pupil exhibits.)

48. It is true, O friend! Surely, too, thou hast taught this wisdom to the world?

49. Nay; my teacher sent me south, to a school of prophets, where I learned the mysteries
of invocation and prayer.

50. For what purpose hast thou visited my temple?

53. A useful employment is the highest service to the Maker of all.

54. Thou and thy people shall be my people; my harvests shall be thine; and my
gardens and orchards; for He whose eye seeth all, is upon me, and I am His servant.

55. There are three more chambers in my temple: The first preserveth the wisdom of the
ancients. The second is the chamber of industry and inventions.

56. In the third and last chamber are the secrets of the fullness of worship. The name of
this chamber is Om, because it is here the recipients repose in spirit from all the cares of
the earth. (Signs and pass-words, and form of initiation, withheld from publication,
because the rites are still practiced.)

I’HIN.
HOUBRI. PAN. ALGONQUIN. HOA’TU.
1. These, then, are the chief tribes, being some Faithists and some Idolaters, and these are
such as were revered in after generations, to wit: 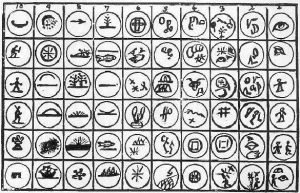 Plate 76.
[Read downward beginning with column 1. Refer to Se’moin and other tablets]